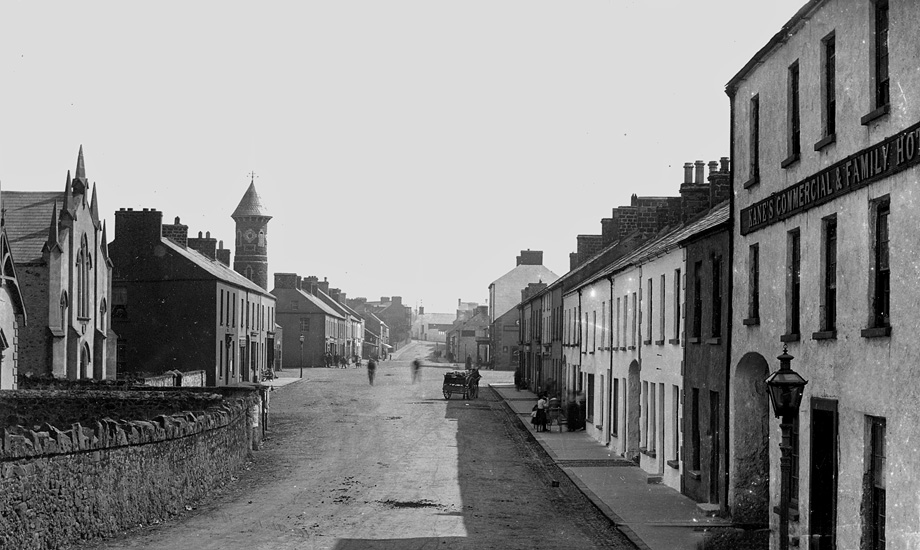 The Bushmills Inn has a long heritage that goes back to when the original hotel was built in the early 1800s, there was another tavern on the site but references to it are very few. The new hotel was built to accommodate the growing number of visitors coming to the Giant's Causeway. Before the Bushmills Inn,  the hotel was known as  'The Antrim Arms' and  prior to that 'Kane's Commercial & Family Hotel.  The photograph shows the view and the hotel around the turn of the 19th century.

If you visit the hotel you will find work by  local North Antrim artist James  Alexander McKendry who was born in Bushmills in 1935 and was a member of the Young Contemporary Artists based in Dublin. His sculpture 'Knights of the Red Branch' completed in 1961 is based on the story of the legendary warriors who once guarded the northern coast from Viking attack. The sculpture was acclaimed for its appeal to the myth and legends of an heroic past and is mounted on the wall of hotel.

A community based creative art project delivered by The Big Telly Company at beginning of 2017 discovered stories and glimpses into the past through conversations, creative writing and reminiscence with local people. The result brought alive characters and folklore from the past which were then formed with atmosphere into audio.  Click below to eavesdrop on perhaps a conversation that took place in a local  bar in Bushmills in the days when the market and hiring fairs were still taking place at the Diamond.