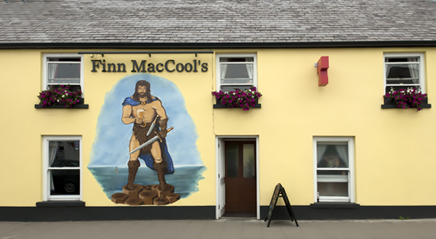 Finn MacCool's is the one of the oldest taverns in the village, first public records refer to it being  open in 1803 as the Reid's Hotel. The date of the building goes back further, the current owner has references in the deeds to the mid 1700s. During recent renovations (see photo below) a glimpse into the past structure of the building was revealed below the plaster. Two distinct arches can be seen one around the right lower window constructed of basalt stone, the other of red brick behind the figure to the left.

With a steady flow of people to the Giant's Causeway and the nearby Distillery several pubs and Inns developed within the village. The town was also the mail centre for the area and the premises served as the pick up and delivery point for the mail.

In 1883 when the Causeway Tram Service started between Portrush and Bushmills local people saw an opportunity to develop their town to cater for the increasing flow of new visitor's. However, this was not altogether successful, travellers began to by-pass the town when the tram extension was created to the Giant's Causeway in 1887. It is believed Finn MacCool's originally started out as a coaching tavern which later serviced the mail,  it may also have had a large coaching yard and blacksmiths to the rear.  Prior to being Finn MacCool's the building was known as the Commercial Hotel. Today it is a vibrant Public House and Guest Inn for visitors to the area. www.finnmaccoolsguestinnbushmills.com 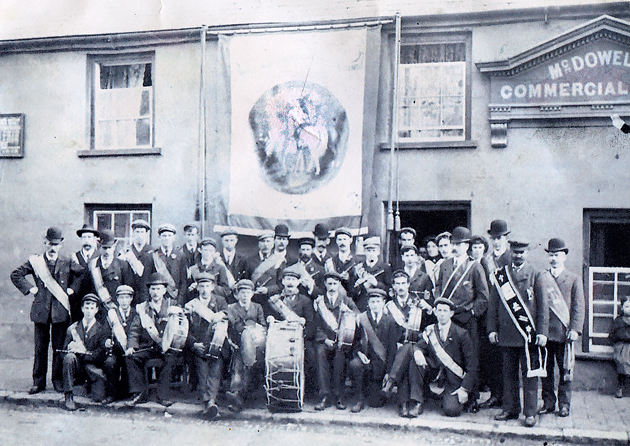 Posing in front of McDowell's Commercial Hotel, Bushmills are the members of Portstewart Flute Band and lodge officials who are attending their annual outing on the last Saturday in September. Local landlord Moore Brown who occupied the castle, sponsored this event and provided wagonettes as a means of transport from Portstewart. The hotel on Main Street has long been a popular  lodging house for visiting anglers and tourists and was the local posting establishment. 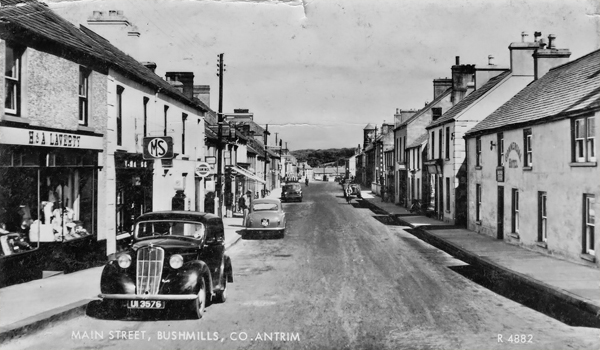 Looking up the Main Street with The Commercial Hotel (Finn MacCools) on the left hand side.