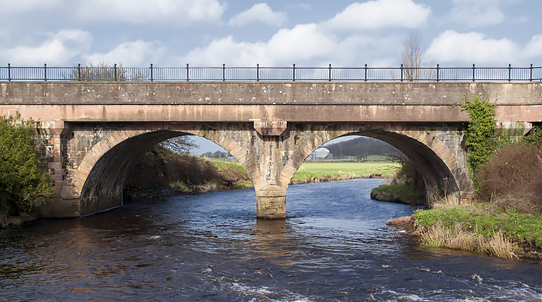 Known locally as the New Bridge, it was built to improve access through the village. This was a major project at the time which involved earthing up a gradual incline from the Diamond area to accommodate the road and construction of the new bridge.

Prior to this the Portrush side of the river  was seven metres higher than the town side. The topography of the river Bush from the Walkmill Falls resembles a small gorge which opens out onto a flood plain between the two bridges.

The lower part of the village was always subject to flooding and you can still see the protection wall which runs down the town side of the river opposite Millenium Park. This was created to prevent the river following the lower part of the town. The older bridge once had four arches to channel water.

As you look from the bridge and admire the landscape you are looking over an area of land associated with Amergin who was known as the 'Poet from the Bush' He was the son of a master blacksmith who lived beside the river Bush at Ballaghmore. Amergin was born dumb and never spoke a word until he was fourteen years old.  One day, Athirne, Ulster’s chief poet, sent his servant to the blacksmith to order a new axe. While he was there,  Amergin spoke for the first time in an articulated and very poetic way. This shocked the servant who had always known Amergin as a silent child. On arriving back he told Athirne about what he had heard and witnessed.

On hearing this Athirne became concerned that there might be someone who could challenge his position, he became so worried about this that he resolved to kill Amergin and remove any possible challenge to his position.  Amergin’s father also feared for Amergin's life and decided to make a manikin likeness of his son which he placed in a corner of the blacksmith’s shop.

When word was sent that the axe was ready, Athirne  came in person to collect it, he immediately noticed what he thought was Amergin sitting in a darkened corner.  He took the new axe in his hands and swung it in the air, pretending to admire the craftmanship and balance of the weapon in his hands, suddenly he lunged for the corner and brought the axe directly down on what he thought was Amergin and immediately turned and fled the smithy believing he had put an end to any possible rival.

When the King of heard about this, he forced Athirne to repay his evil act by taking Amergin and encouraging him to develop his gift with words.  Amergin developed beyond the belief of everyone and became the chief of all the poets of Dalriada and afterwards, the chief poet to  Connor McNeese, the King of Ulster. He married the sister of the King and their son  was the Ulster warrior, Conall Cernach.