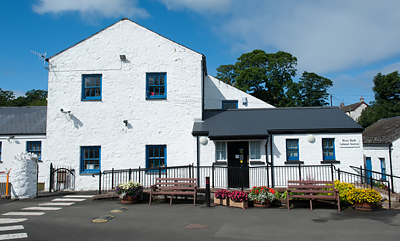 Salmon fishing has always been a feature of the river Bush, the fish come to the head waters of the river Bush in order to spawn. Although fishing would have been taken place since the Neolithic period when man first settled here, modern records show that the fishing heyday occurred around the early 1900s and continued until the 1960s when it declined.

The natural life cycle of a salmon is one of nature’s wonders. A salmon begins its life in the shallow water and gravel beds of the river where the eggs develop into fry. These small fry stay in the river until they mature into par. The next stage of their life is when they mature into smolts and take on the colouring of the mature salmon. The smolts move downstream around May or June to begin their epic migration to feeding grounds in the north Atlantic. Here, they feed on fish, such as capelin, herring and sand eel, which give the salmon’s flesh that characteristic pink colour. Over the next year, the smolts mature into grilse and then make their way back to the same rivers they left and spawn to complete the cycle. 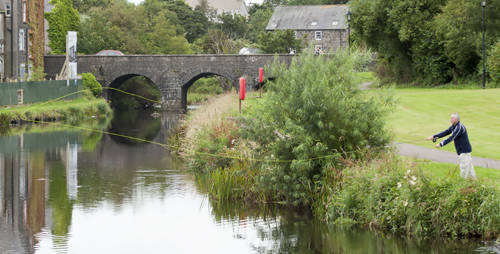 How they find their way back home is still one of the great mysteries of natural world! The Salmon Research Station began its work here in 1972 and is operated by the Inland Fisheries Division of the the Department of Culture, Arts and Leisure. Prior to the this it was  a private fishery established on the site of an old Scutching Mill, part of  which forms the building we see today.

The fisheries also rear smolts to provide additional fish returning to the river, a proportion of these are tagged to provide more research data such as how many survive at sea and return as adults to the river. Some of the ova and fry produced in the hatchery from these returning adults are used for stock enhancement of the River Bush or to reinstate salmon in rivers where their numbers are at a critical level or extinct. 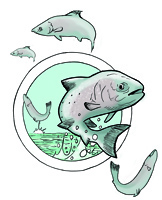 The research programme has led to the recognition of the River Bush as an index river by the International Council for the Exploration of the Sea (ICES). This designation requires it to provide long term scientific data to the ICES who require  that specified and selected rivers such as the Bush are monitored  over a long period to provide information on  smolt production, exploitation rates, geographical distribution of catches, adult returns and spawning.

As well as research the river still provides for recreational fishing along its banks for salmon, brown trout and sea trout. A strict catch and return policy operates for salmon and any trout under 25.4cm must also be returned to the water. There are  four beats from the Walkmill Falls to Dundarave  which allows eighteen rods per day.

Today the run of salmon is at an all time low due to many factors including offshore catchment. To try and combat the decline in wild salmon stocks, shore net fishing stations around the coast were closed. Around the turn of the 20th century a net would have been placed across the river midway between the two bridges. The old slipway for the boat and net hauling is still visible as you follow the walk from the village to Millenium Park.