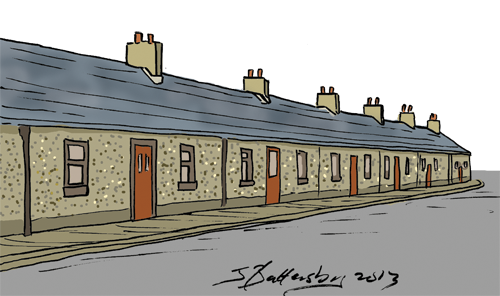 This quaint row of seven cottages  were built in 1820 by the Macnaghten family specifically for those who worked or had worked on the Dundarave Estate.  If you look closely you will notice something very unique about them, each window sill on the front consists of a single hexagonal column of Causeway Stone and four of the cottage still have a Causeway Stone stool outside the front door.  They are now listed as part of the built heritage of Bushmills. During their time they have been the home for nail makers and mill workers, today they are private residences.  The cottages hit the headlines in April 1928 after an incident which occurred here. 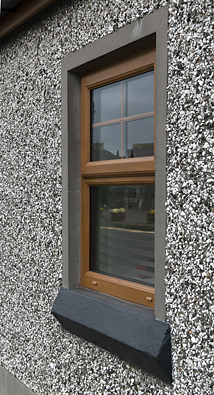 Living in one of the cottages was a Mrs. Eliza Joab who worked as a launderess for  Miss Macnaughten of Runkerry House and Lady Macnaghten of Dundarave House. She was ironing clothes at the time using a new petrol iron when it suddenly went on fire.

She threw a piece of of heavy cloth on the iron which also ignited. In a bit of a panic she ran out into the yard to get a  wet sack, the moment she left the kitchen there was a large explosion sending the iron through the roof damaging the ceiling and roof slates as well as blowing out the window of the back bedroom. Fortunately Miss. Joab who was badly shaken by the experience, was unharmed but refused to use a petrol iron for a while.

Gas and Petrol Irons were new technology at the time aimed at speeding up the process or ironing, prior to this a cast iron would be heated on the range or fire, then used until it cooled and required re-heating.